Jeanine York-Garesche, clarinetist, holds a bachelor’s degree from the University of Nebraska-Lincoln and received her Master of Music performance degree from the St. Louis Conservatory.

Ms. Garesche plays professionally with Union Avenue Opera, the Metropolitan Orchestra of St. Louis, the Fox Theatre Orchestra, the Equinox Chamber Players, Trio Bella, as well as serving as a replacement player with the St. Louis Symphony and Opera Theatre of St. Louis.

She has served on the staff and faculty of Tidewater Music Festival (Maryland), served as clarinetist in residence for the Kneisel Hall Chamber Music Festival (Maine), and performed at the 2008 International Clarinet Convention.  She is a member of the Ladies Friday Musical Club, ACME (the Artists, Composers, Musicologists, and Educators branch of Mu Phi Epsilon), and received the Owen Miller Award from the Musician’s Association of St. Louis in 2014. Jeanine is also a pianist and is currently substitute keyboard player for St Stephen’s Episcopal church of Ferguson.

Jeanine is known throughout the Midwest as a private instructor, chamber music coach, and clinician. Her students have won top honors in Missouri’s District and State competitions and honor bands. A sought-after chamber musician and recitalist, she also serves on the faculties of the University of Missouri-St. Louis, Webster University and the Community Music School of Webster University.

Originally from the family farm in northeast Nebraska, Jeanine makes her home in St. Louis with her husband, Tom and their cat, Oliver. 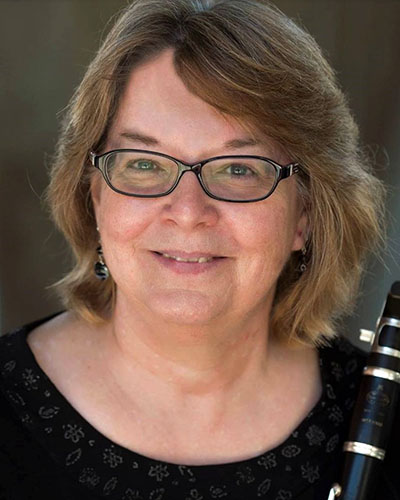