Dr. Cairns' research interests involve the modernist music of the Soviet Union during the Khrushchev Thaw, rhythm and meter in rock music, and film music theory. He has presented at numerous international, national, and regional conferences, and his work has been published in Studia musicologica, Music Theory Online, Indiana Theory Review, Gamut, and Music Theory and Analysis. In 2012, he was awarded a grant from the University of Missouri Research Board to conduct research at the Tanyeev Library of the Chaikovsky Conservatory in Moscow, Russia. And in 2021, he was awarded a campus-level grant to travel to Los Angeles to study film scores at several different libraries and studio archives.

As a composer, Dr. Cairns' works have been performed across the United States and in Europe. His work Two Pieces for Baritone Saxophone and Percussion won first prize in the 2014 Percussive Arts Society's Composition Contest. An expanded version of that work, Interactions for Baritone Saxophone and Percussion, was premiered at the World Saxophone Congress (SaxOpen) in Strasbourg, France in July 2015. A work for wind ensemble titled Refracted Moonlight has been performed by numerous collegiate and advanced high school bands across the country. Other works include Rhythmic Ceremonial Ritual for 7 antiphonal tambourines (yes, you read that correctly), The Land of Nod for two-part treble choir with piano, clarinet, violin, and percussion (also available for SATB choir with the same instrumental forces), Concert(in)o for Marimba and Wind Quintet, and Passing Through for alto saxophone and string trio.  Another work, Blumenlieder (for mezzo-soprano, flute, cello, and piano), based on the poetry of St. Louis native Sara Teasdale, was premiered in Stuttgart, Germany in 2018 as part of the American Days festival. Several of Dr. Cairns' works are available for purchase through C. Alan Publications and Carl Fischer. Please contact Dr. Cairns directly for performance information on any of his non-published works.

Zachary Cairns lives in St. Charles, MO with his wife, Whitney, and their two children.

A conference presentation titled "Whole-Tone Collections and Temporal Dislocation in Film Music" for the Music Theory Society of the Mid-Atlantic, summer 2021.

Beyond the Sequestered Grove for solo marimba

Marimba Malinke for marimba and djembe

All In for chamber orchestra

Fanfare: Generation Next for band (gr. 3)

Where Does My Song Go? for one-part treble choir with piano (co-written with Whitney Cairns) 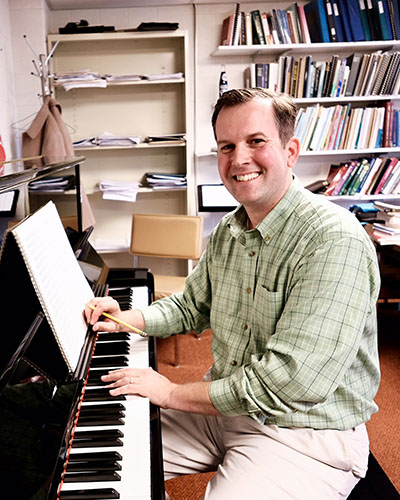