Message from the Office of the Chancellor 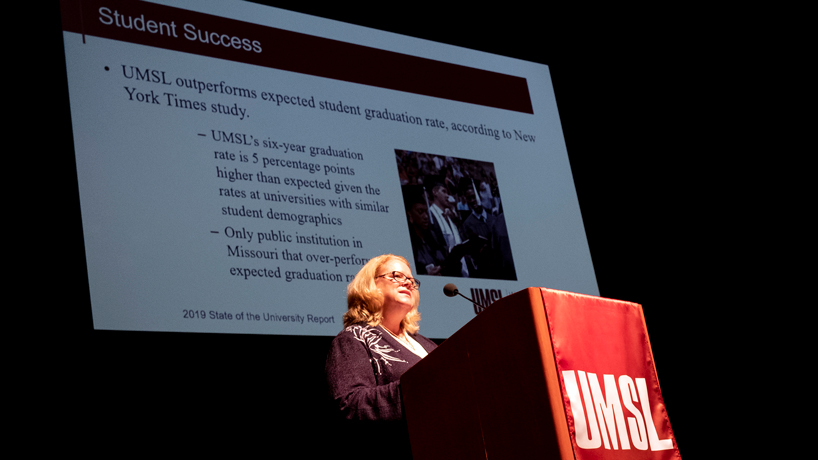 Interim Chancellor and Provost Kristin Sobolik celebrated the university’s accomplishments helping people, including those from disadvantaged backgrounds, learn and improve their economic standing during the annual State of the University Address on Thursday afternoon at the Blanche M. Touhill Performing Arts Center.

“UMSL’s fundamental purpose is to educate and graduate students, and to provide access to success,” Sobolik told an audience that included University of Missouri System President Mun Choi and members of the UMSL community from across campus assembled in the Anheuser-Busch Performance Hall. “UMSL is an institution of opportunity.”

Over the past year, the university has awarded nearly 3,000 degrees and certificates, bringing its growing list of alumni to 103,000. With 41 percent of UMSL students Pell Grant eligible and 76 percent receiving financial aid, many graduates overcome financial challenges on their way to the commencement stage.

A study last spring in The New York Times revealed that UMSL’s six-year graduation rate is 5 percentage points higher than expected given the rates at universities with similar demographics. It was the only public university in the state that over-performed its expected rate.

More recently, U.S. News & World Report listed UMSL among the top 100 schools in the country in its new social mobility rankings, which measure how successful universities are at graduating students who receive federal Pell Grants. UMSL was one of only two universities in Missouri to rank in the top 100.

Among recent graduates, 94 percent are either successfully employed or continuing their education, and the ones moving into the workforce have found an average starting salary of $44,100.

The university has been able to support its students through strategic investments in scholarships at a time when the cost of higher education can limit access.

Sobolik noted that UMSL has realized a balanced budget for the third straight year and maintained its reserves – and the only UM System university to provide merit raises for three consecutive years – but there is more work ahead to ensure UMSL remains on solid financial ground.

“Student headcount is down about 2.8 percent at 16,007 students – which mirrors a national trend of declining enrollments for the past eight years,” Sobolik said. “But we must rise to the challenge and reverse this trend to provide the opportunity for transformative education to more people.”

Other highlights from Sobolik’s presentation: