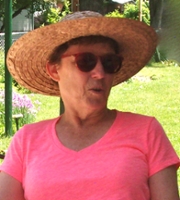 Mary Troy is the author of the novel Swimming on Hwy N (November 1, 2016), and the novel Beauties, winner of the USA Book Award and finalist for Forewords Book of the Year Award. Her previous three books are collections of short stories. Cookie Lily won the Devil’s Kitchen Award for best book of prose published in 2004, The Alibi Café and Other Stories earned a glowing review in The New York Times, and Joe Baker Is Dead was nominated for the PEN/Faulkner and other awards. A short story, “Do You Believe in the Chicken Hanger?" won a Nelson Algren award, and her stories and essays have appeared in many anthologies.

Under the Arch, St. Louis Writers; Honolulu Stories, Two Centuries of Writing, American Fiction, number 2 and number 3, In The Middle of the Middle West.

Riverfront Times, Echo Ink, Center For Literary Studies, In The Middle of the Middle West, ﻿and more.

Professor Troy has served as editor of the internationally distributed literary journal Natural Bridge since 2009.