ABSTRACT: This collection is consists of 19th century correspondence between the G.W. Hill, one of the founders of the Eagle Packet Company on the Mississippi River, and his brother. The letters were saved by family members until their donation to the Pott Library.

SCOPE: The 40 letters cover a period from December 26, 1879 through October 24, 1886, with a gap from mid 1882 to 1884, written by G.W. Hill to his brother R.E. Hill. All the letters were written on Eagle Packet Company stationery, and are part of an ongoing conversation between the brothers as they took care of family, farm, and their business interests. During this time the Eagle Packet Co. added the steamboats Bald Eagle, Dora, and a new boat also named Spread Eagle.

HISTORY:  As a young man, G.W. Hill engaged in steamboating, and navigated the Mississippi, Illinois, Missouri and Des Moines Rives. In 1860 he went to California by the Panama route, and in the same year, was one of the four founders and directors of the Eagle Packet Co. He was the company's Secretary and Treasurer for around 40 years until 1903. In the summer months of these early years of the company, he acted as Head Clerk on the Spread Eagle, and in the winter season, when the boat was laid up, he helped his older brother, R.E. (Robert Edwin) Hill operate the pork packing plant in Alexandria, MO.

The Hill Family's influence extended beyond their homes and property to area institutions: organizing a church; land donations to establish Alexandria as a county seat; and a cemetery, also all along the Mississippi River, including Warsaw, IL across the river from Alexandria, MO. The Eagle Packet Company and steam boats shaped Warsaw's early history, and can be seen in their City Seal with a steamboat, adopted in 1858 and continued in use today.

In 1891, the company made its first expansion, and bought the St. Louis, Naples and Peoria Packet Co. that owned the steamboats D.H. Pike and the Calhoun, the latter was dismantled and material was used in a new steamboat, the Grey Eagle. Also in that year G.W. Hill was the agent for Diamond Jo, and the St. Louis, St. Paul and Mississippi Packet Co. The St. Louis and Mississippi Packet Co. was acquired in 1894, and this adding and later replacing steamboats, and putting the boats in new trades continued over time. G.W. Hill in 1903 sold his interest in the Eagle Packet Company, but retained stock in the Chester Co. When that line was sold, he invested in the St. Louis and Hamburg Packet Co., the steamboat, G.W. Hill was named in his honor Eagle Packet Co. Sale Document 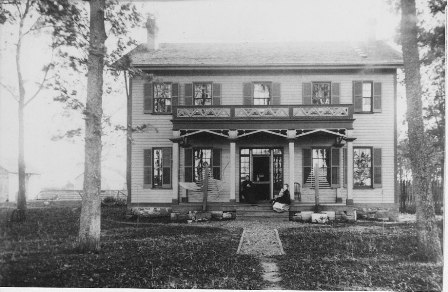 These letters were saved first by the recipient, "Major" R.E. Hill. At the death of R.E. Hill in 1886 the letters passed into the hands of his wife, Ellen Elizabeth Hill. Their youngest son, Granderson Winfree Hill, named after his uncle, lived with his mother on the family farm at Alexandria, Missouri, until her death and until the farm was sold. When "Gran" died, the letters were passed on to his sister, Nancy Hill Mann, then to her daughter, Elizabeth Mann Johnson, and next to her daughter, Nancy Johnson Budd, a great granddaughter of R.E. Hill, surviving being stored in basements and attics, and a number of Mississippi River floods. These letters were given to the Herman T. Pott National Inland Waterways Library, of the St. Louis Mercantile Library at the University of Missouri-St. Louis for safekeeping and to benefit others.

For further information about the Hill brothers:

ACCESS: This is collection P-020. This collection is available for on-site use only in the Rare Book and Manuscripts Reading Room. Some of the collection may be photocopied, digitally scanned or photographed, depending on condition. Researchers are advised to call ahead concerning changes in hours due to University intersessions and holidays. The St. Louis Mercantile Library is located on levels one and two of the Thomas Jefferson Library building. More information about conducting research with the archival collections of the Library, including current building hours and reading room policies, can be found on our Research page.

Preferred Citation note: The preferred citation for this collection is "From the collections of the Herman T. Pott National Inland Waterways Library at the University of Missouri - St. Louis.”

Transcriptions of the 40 letter are available for downloading:

This is Special Collection P-20. Some of the collection may be digitally scanned, or photographed, depending on condition, please contact the curator with any questions.