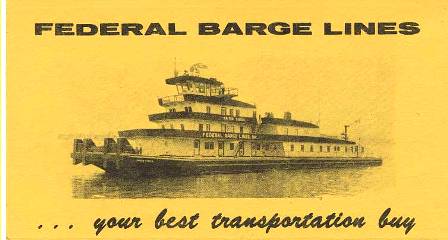 The Federal Barge Lines materials are arranged into seven series:

Series 1: Finances includes financial statements; barge charter agreements, contracts, and rates; fleeting and towing agreements; maintenance and damage budgets; insurance correspondence; sales information for towboats and barges; and a contract for the salvaging of a sunken barge. The papers are mostly from the 1960's and early 1970's, except for a 1928 consultant's report on the Tri Cities River Terminal at Davenport, Rock Island, and Moline and the Annual Costs and Statistics of the Inland Waterways Corporation for 1938. The papers in this series do not reflect all financial aspects of Federal Barge Lines, but represent the financial considerations of the maintenance and repair of towboats and barges.

Series 2:Traffic includes the costs for specific cargo movements and the notes and considerations used to arrive at those costs, such as: size and type of barge needed; navigational considerations (including weather forecast); repair facilities; cleaning costs; damage costs from loading and unloading; and the towboat requirements including fuel, manpower, and insurance.

Series 3: Operations includes materials about ports visited by Federal Barge Lines; Army Corps of Engineers and Coast Guard information which affected Federal Barge Lines, such as: proposed projects and Lock and Dam 26 information; employee information such as seniority lists, engineer applications, and training programs; safety information; environmental regulations (mostly regarding water pollution) and river stages for the Mississippi River and its major tributaries from 1972 through 1976. This series also contains a list of files relating to Federal Barge Lines' operations which were sent to the National Archives.

Series 4: Engineering and Maintenance contains inventories, descriptions and specifications of barges owned by Federal Barge Lines; financial reports and budgets regarding maintenance of barges and towboats; inspection reports; conversion specifications (for converting steam towboats to diesel and barges for one kind of cargo to barges for another kind of cargo); correspondence regarding maintenance; advertising brochures, catalogs, and operation manuals from companies producing marine equipment, engines, and parts and maintenance products. This series contains rare operation manuals for Busch-Sulzer diesel engines from the 1940's and extensive correspondence with Cooper Bessemer regarding towboat engines and parts. The series contains lubrication and engine performance records for towboats. And Series 4 contains a limited amount of blueprints specific to the maintenance problems being studied. The Engineering and Maintenance Series is divided into two subseries with materials relating to Barges coming first and materials relating to Towboats coming second.

Series 5: Machinery History is a collection of files which were labeled "Machinery History" and deal with the machinery of towboats. They are arranged alphabetically by the motor vessels' names and chronologically for each motor vessel. The materials in the folders describe repairs done to the towboats and include parts requisitions and labor and parts costs. A few machinery blueprints are included when necessary.
The last box of Machinery History files (Box 23) contains files dealing with the re-powering (new engines) of specific towboats, electrical conversion from DC to AC, and renovation specifications.

Series 6: Blueprints consists of 34 boxes of blueprints of towboats and barges which belonged to Federal Barge Lines. The blueprints are divided into two subseries-Towboats coming first and Barges coming second.
The towboat blueprints are arranged by number. Consecutive numbers indicate a single project-one particular towboat. Different builders had different numbering systems and the Inland Waterways Corporation changed numbering systems, so numbers skip around. Therefore, groups of numbers have been given a loosely chronological arrangement. The blueprint plan numbers are found on the right hand side of the folder label and indented under the folder title in this inventory.

Barge blueprints are arranged by kinds of barges. Covered cargo barges and covered hopper barges come first. Open hopper barges come second. Ocean-going barges come third. Tank barges come fourth. Car floats come fifth. Barge parts and equipment come sixth. And blueprints for the terminal and warehouse at Birmingham, AL come last.
Blueprints within each barge group are arranged chronologically by series or hull number which is given in the folder title. The blueprints are also arranged chronologically by blueprint plan number (listed on the right side of each folder and indented under the folder title in this inventory) which usually turns out to be chronologically by date also. Blueprint numbers beginning with B are for barges, and blueprint numbers beginning with M are for hatch covers. Plans for hatch covers are found right after the plans for the barges for which they are intended.

List of all barges for which there are blueprints, their uses, their builders, and their dates of construction: 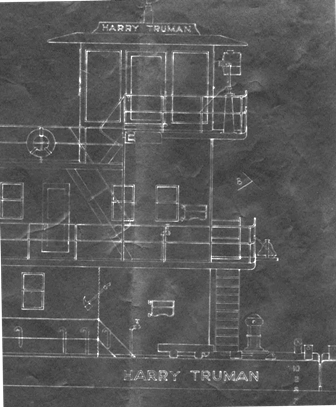 CAR FLOATS used for transporting railroad cars at Cairo, IL, built by Inland Waterways Corp. in 1931 and revised by St. Louis Ship in 1947.

HISTORY: After a congressional committee had surveyed the strain of World War I on the country's transportation facilities, it was suggested that inland waterways and terminals could be utilized to help relieve an acute shortage of railroad cars created by the demands of war. Provisions of the Federal Control Act of 1916 gave control of the railroads to the federal government; and the Director General of the Railroads, Mr. W.G. McAdoo, commandeered all privately owned floating equipment on the Mississippi and Warrior Rivers in 1918. New equipment was purchased and weekly service on the Mississippi River between St. Louis and New Orleans began. 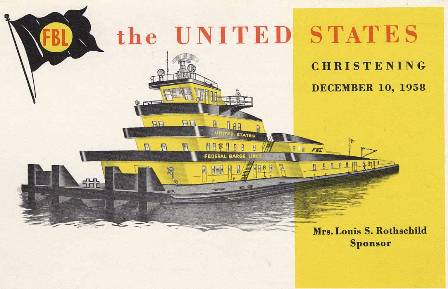 The Inland & Coastwise Waterways Service was established by the 1918 Federal Control Act to serve as a temporary boost to ailing inland waterways companies. All privately-owned equipment on the New York State Barge Canal and the Mississippi and Warrior rivers were commandeered as an emergency measure until new vessels could be built. The Inland Waterways Corporation was created in 1924 "to promote, encourage, and develop water transportation, service, and facilities in connection with the commerce of the United States, and to foster and preserve in full vigor both rail and water transportation." To fulfill the water transportation aspect, the Corporation operated barge lines called the Federal Barge Line on the Mississippi-Missouri and Warrior Rivers. As a result of a successful bid in 1953 a subsidiary of the St. Louis Shipbuilding and Steel Co. took over the Inland Waterways Corporation (Federal Barge Lines).

To read more about the history this corporation, see "The Federal Barge Line," by William J. Petersen, The Palimpsest, vol. 53 (September 1972), pp.390-401. (Copyright 1972. State Historical Society of Iowa. Used with the permission of the publisher.)

Requests for information about Federal Barge Line employees and/or medical records must be in writing with your signature and date to:

National Personnel Records Center: Civilian Personnel Records: 111 Winnebago St.: St. Louis, MO 63118: or Fax: 314-801-9270. If you are writing about someone other than yourself include as much of the following information as possible: name of agency, proof of death, full name used when employed, date of birth, social security number, dates employed, date of separation, what information you are seeking and documents. The National Personnel Records Center is an agency of the National Archives and Records Administration.

Civilian employees of the federal government are listed in the Official Register of the United States, 1816-1959, published every other year. Libraries designated as a federal documents depository library should have this publication.

Information about the content and use of the Official Register

ACCESS: This is collection P-002. This collection is available for on-site use only in the Rare Book and Manuscripts Reading Room. Some of the collection may be photocopied, digitally scanned or photographed, depending on condition. Researchers are advised to call ahead concerning changes in hours due to University intersessions and holidays. The St. Louis Mercantile Library is located on levels one and two of the Thomas Jefferson Library building. More information about conducting research with the archival collections of the Library, including current building hours and reading room policies, can be found on our Research page.

Preferred Citation note: The preferred citation for this collection is "From the collections of the Herman T. Pott National Inland Waterways Library at the University of Missouri - St. Louis.”