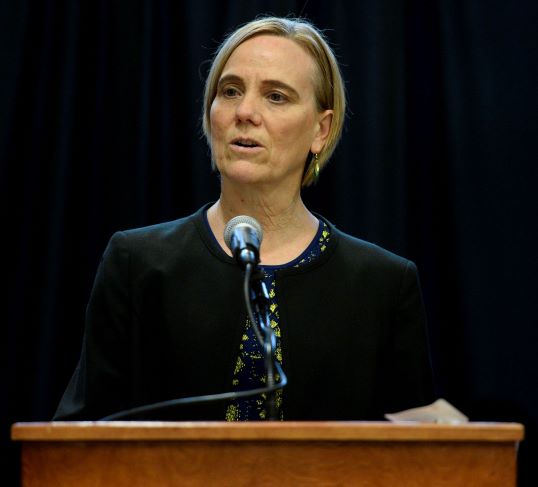 Education: Dr. Susan Brownell received her Ph.D. from the University of California, Santa Barbara, in 1990.  She joined the department in Fall, 1994.

Research and Teaching: Dr. Brownell is an internationally recognized expert on Chinese sports, Olympic Games, and World’s Fairs. She won UMSL’s Chancellor’s Award for Research and Creativity in 2015.She has done fieldwork in China, primarily in Beijing and Shanghai. In 2007-08 she was a Fulbright Senior Researcher at the Beijing Sport University, doing research on the Beijing Olympic Games.  She also did research at the Olympics in Athens, Rio, and PyeongChang. At UMSL, she teaches The Body in Culture; Medicine in Culture and History; Senior Seminar; and courses about China, East Asia, and health and medicine.

Personal History: Dr. Brownell grew up in Virginia.  She traces her interest in China back to the stories told by her grandmother, whose father was governor of Mississippi, a civil rights proponent, and lawyer for the Mississippi Chinese Association in the 1910s and 20s.  Her love of anthropology began as an undergraduate at the University of Virginia, where she took Victor Turner's famous seminar, in which the participants reenacted different rituals from around the world.

She was also a nationally-ranked track and field athlete in the U.S. before she joined the track team at Beijing University in 1985-86 while she was there for a year of Chinese language studies.  She represented Beijing in the 1986 Chinese National College Games and set a national record in the heptathlon.  In 1987-88 she returned to the Beijing Sport University for a year of dissertation research.

She has taught at Middlebury College, the University of Washington, Yale University, and Heidelberg University.

Dr. Brownell is frequently interviewed by major media about Chinese sports and Olympic Games.  She has written many online commentaries.

E-Journal series on the Rio 2016 Olympics with Niko Besnier for SAPIENS: Anthropology/Everything Human. Web portal for anthropology sponsored by the Wenner-Gren Foundation for Anthropological Research.

Do the Olympics Make Economic Sense?

Zika at the Rio Games: Pandemic or Panic?

Rio’s Olympic Festival in the Streets

Your Olympic Team May Be an Illusion

Presentation on China’s Bid for the 2022 Winter Olympics, delivered to the National Committee on US-China Relations (March 2015).

Training the Body for China: Sports in the Moral Order of the People's Republic (University of Chicago Press, 1995). This is the first book on Chinese sports based on fieldwork in China by a Westerner.

Beijing’s Games: What the Olympics Mean to China (Rowman and Littlefield, 2008).

Edited, The 1904 Anthropology Days and Olympic Games: Race, Sport, and American Imperialism (University of Nebraska Press, 2008). This book won the 2009 Anthology Award from the North American Society for Sport History.

Edited with William Kelly, of The Olympics in East Asia: Nationalism, Regionalism, and Globalism on the Center Stage of World Sports (Yale Council on East Asian Studies Monograph Series, 2011).

Edited, From Athens to Beijing: West Meets East in the Olympic Games, vol. I: Sport, the Body and Humanism in Ancient Greece and China (Greekworks, 2013)

Translated from Chinese into English: Liang Lijuan, He Zhenliang and China’s Olympic Dream (Beijing: Foreign Languages Press, 2007). A biography of He Zhenliang by his wife; he was the PRC’s senior sports diplomat and first member of the International Olympic Committee. Brownell got to know the two of them in the process of translating the book.